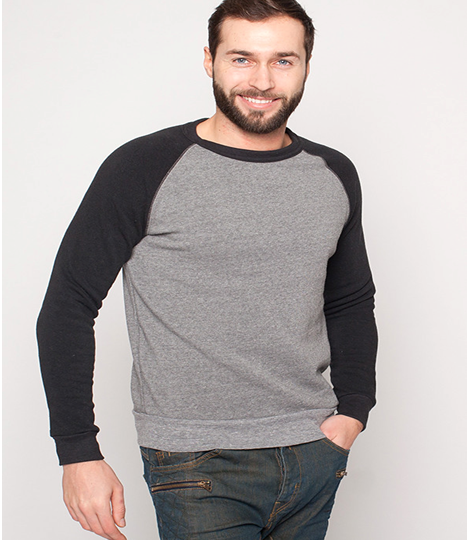 The popularity of the sweatshirt spans all social backgrounds and generations, and it’s a staple in most people’s wardrobes. But how did this iconic design develop? Well, it all started in Alabama, in the 1920s, with someone called Benjamin Russell.

Similar to its cousin the hoodie, the roots of the sweatshirt lie in American sports. Benjamin Russell owned a women’s and children’s undergarment factory, and one day his son, Bennie Russell, came to him with a problem. Bennie played American football and had become frustrated with how uncomfortable the wool jerseys worn by the players were. Using women’s underwear material as an alternative, Benjamin began developing a softer, more comfortable top.

The popularity among the football team was immediate and the design was quickly adopted by both football and baseball players across America. The sweatshirt design shortly became intrinsically linked with American sport and comfort. If you’re wondering where the name came from, it was coined by factory workers who commented on the state of the garment post-game!

Since their inception, sweatshirts have featured a triangle shape on the front collar. The technical name for this feature is the ‘V-insert’ or ‘V-stitch’ – this is a piece of the cotton jersey that’s ribbed or a piece of material that’s elasticized, as is often used in waistbands. Originally, the use of it in a sweatshirt was designed to collect sweat around the neckline and chest while exercising.

Aside from its practical use, the V-stitch also helped control the amount of stretch around the sweatshirt’s neckline when putting it on and taking it off. Nowadays, with modern improvements in fabric design, the triangle is more of a design feature than a technical one. Modern tops like the Farah sweatshirt https://www.ejmenswear.com/men/farah/sweatshirt are inspired by tradition but feature modern design techniques.

Sweatshirts commonly contain a particular knit on the underside that features loops, known as “loopback”. The name derives from “loopwheel”, a machine that was traditionally used to knit the fabric. Early versions of the loopwheel reduced the knit’s tension, but modern methods now create the pattern from two yarns and ensure it’s tightly knitted. This means the tops are more resistant to getting bobbles (known as “piling”) as they age. The loop pattern was originally designed to ‘wick’ sweat away from the body and keep it cool.

Are These Some Of The Worst Ever Football Kits